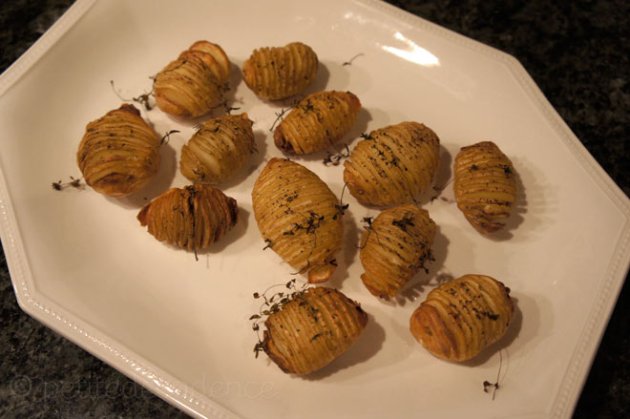 Imagine if we were all an ingredient; wouldn’t reaching our potential be so much easier?? I guess it would depend on which chef’s hands you found yourself in though… But all modesty apart, I think I helped these slightly old potatoes sitting in my vegetable drawer along their way to stardom. And I know, nothing, absolutely nothing, beats some good old gratin dauphinois, especially my mother’s on christmas eve, (because there really is nothing in the world that can compare to cream, cheese and soft warm potatoes all together next to a tender slice of turkey)  but this kind of baked potatoes, which are originally known as hasselback potatoes and are of swedish origin, are really high up there in the ladder of potatoes reaching for the stars. And that’s not only because they’re insanely delicious, crispy on the outside and soft on the inside, but because they’re also healthy (as far as healthy and potatoes can go together) and quick to make. The original version has breadcrumbs, tons of butter, and if I’m not mistaken, paprika. This version, however, is far simpler; thyme, teeny tiny bits of butter and garlic. That’s all you need. Really. Oh, and a sharp knife. 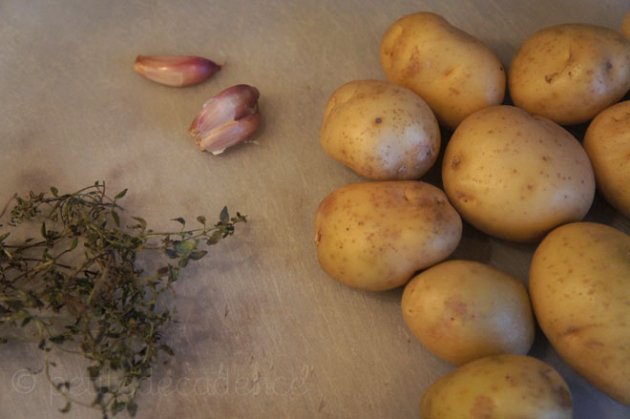 On to the recipe? Yes, of course you want to eat this! Keep reading -> 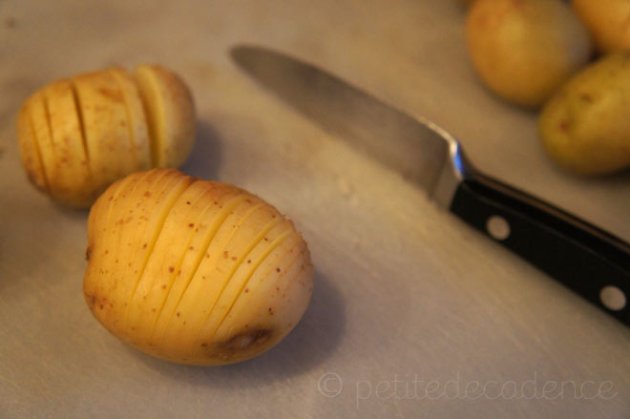 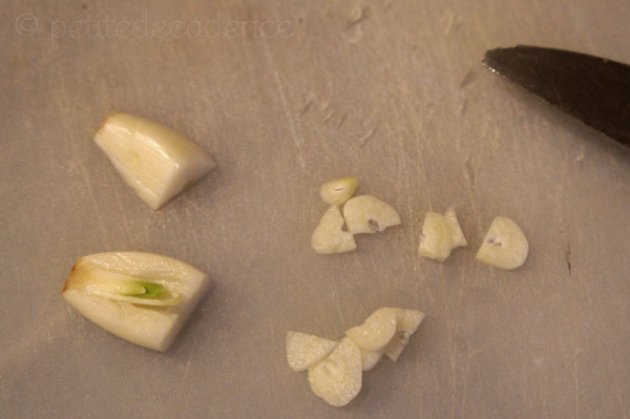 Yield: as many potatoes as you like or need

Preheat the oven to 415º F. Wash potatoes. Using a sharp paring knife, make thin slices (about 3 mm each) on your potatoes, taking care no to cut all the way down. (Err on the side of undercutting if you’re unsure, otherwise your potatoes will break). With your thumbs, open your potatoes as if you were trying to flip a book, to help the slices separate a little. As if you were “flossing” place the thyme sprigs in between the slices. Peel the garlic cloves and cut horizontally in half. Remove the green shoot part. Cut into very thin slices, and place a few in between the potatoes. Do the same with tiny amounts of butter. (a couple dabs per potato is enough). Place directly on a baking sheet and generously pour olive oil on, letting it go inside the potatoes. Season heavily with freshly ground pepper and seasalt. Bake for about 50 min – 1 hour, or until the tops are golden and crispy and the inside is tender.

Note: (you could also sprinkle cheese and a dab of cream on the inside if you’re ignoring the keeping-it-a-bit-leaner side)