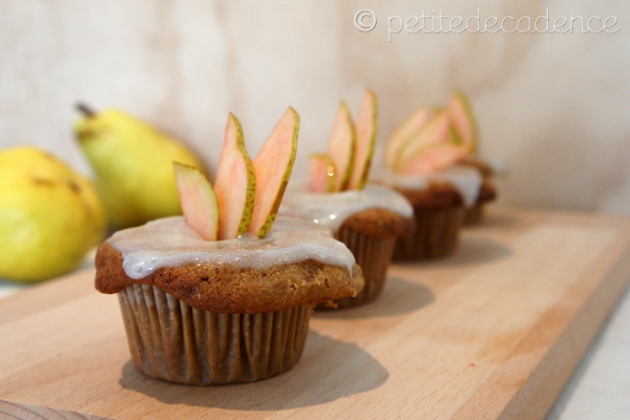 It’s rainy season (or hurricane season if you count the last three days) around here. Which means it’s tea time with a book season. Which in turn means it’s muffin, pound cake, cookies, crumpets and any other pastry you like to have with your tea season. (I’m actually lying. Cookie season is year round) And when you add to the weather tons of gifts of fruit because your friends who own fruit trees have way too much of it, you end up with muffins everyday. Assorted, too. Apple, banana, figs, or in this case, pears. This recipe will give you a simple, homey, spice-y and full of pear little cake. Made all the better by a creamy vanilla glaze, which has become my favorite when glazing fluffy baked goods. (like here) So, if you’re feeling like a quick treat to accompany you rainy afternoon, go and read more for the recipe!

Vanilla Cream Icing:
Recipe adapted from How Sweet It Is

Add sugar to bowl and stir in heavy cream and vanilla until mixture resembles a thick batter.

In a medium saucepan, melt the butter over med heat. Add the diced pears, sugar and cinnamon. Cook, stirring occasionally, until the pears are tender and translucent, and they start lightly browning. Add the lemon juice and set aside to cool.

Preheat the oven to 350ºF.  Line your muffin tins.
Sift together all the dry ingredients and set aside. In the bowl of your mixer on med speed, cream together the sugar and butter until light and fluffy, about 3 minutes. Add the egg and vanilla and keep beating for another minute. Add half the flour mixture, mix, then add half the milk and mix again. Scrape down the sides of the bowl and repeat with the remaining flour and milk. Once evenly mixed, add the cooked pears. Scoop a full tbsp into each muffin tin, and bake until golden brown. Cool on a wire rack.

Once the muffins are cool, drizzle a tbsp of the vanilla cream glaze over each. Slice the small pear so you get several 2-3mm thick slices. (they shouldn’t be too thin or they won’t stand upright). Using a pastry brush, glaze the pears with the fruit glaze (this will keep them from browning and will also make them shiny). Poke a hole with the tip of a knife in the center of each muffin, put together three different-sized slice of pear, open them in a fan-like way and stick them in the hole, deep enough so they’ll stay straight, and you’re done. 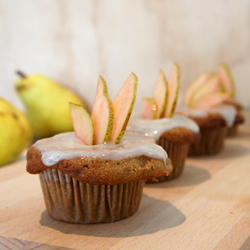