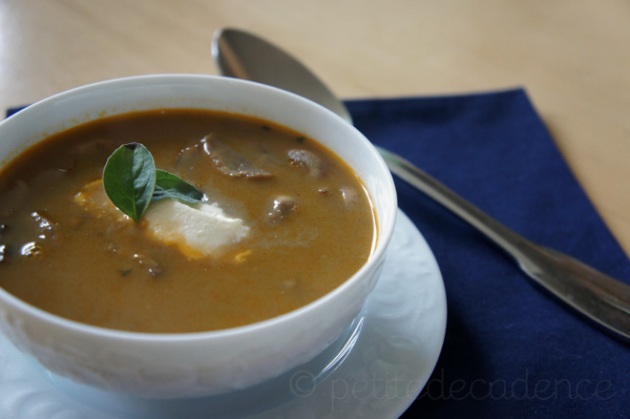 So today started as pretty rough day, even though the first thing I saw when I opened my eyes was raindrops, the wet bark on the trees outside my window, and a lot of birds. (My favorite sight to wake up to). I slept virtually nothing and had an appointment with my acupuncturist, aka my torturer. Anyhow,  after muscle therapy, a nerve block, needles and laser therapy, I left nauseous, dizzy and barely able to stand up, with an apple in my hand kindly provided by one of the assistants. Once back home, I crashed on the floor in my room and dozed for about two hours, and then came back to consciousness with one thought in my mind; I need a pick me up. And so, seeing the pouring rain outside my window, got a strike of inspiration, and a chance at feeling better.  This soup, due to the lack of vegetables in my fridge, has an onion base with a lot of broth, but its compensated by the delicious buttery and milky mushrooms  you’ll add at the end. The result is very light, creamy, delicious smelling lentil goodness. 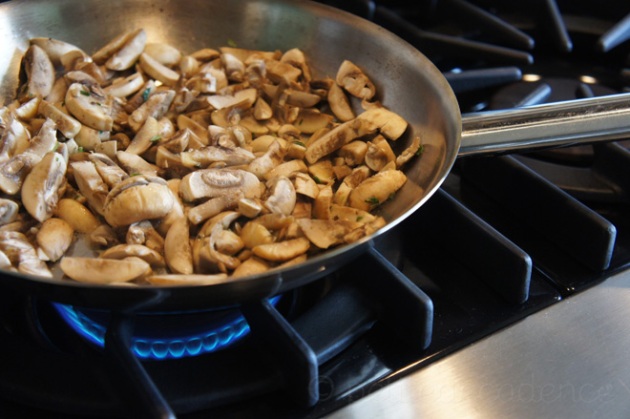 Lentil and mushroom soup
(Own recipe)

3 scallions, chopped (save a few stems)

12 cups hot chicken broth (If you’ve got stock, go for it)

salt and pepper to taste

Directions
Heat the olive oil in a large and deep saucepan. Add the chopped scallions and red onions, along with the whole stems from the scallions (you’ll be taking these out later). Cook over med-low for about 5 minutes, until the onions are soft and see through. Add the shallot and cook for another three minutes, stirring to keep them from burning. Add the tomatoes, stir and add the broth. Bring to a full boil and then reduce the heat to med-low. Let cook for 10 minutes, remove the scallion stems, and using the blender, puree all the solids. Return to the saucepan and once its boiling again, add the lentils. Reduce the heat to simmer, cover, and cook for about 35 minutes, until the lentils become soft.
Meanwhile, in a separate frying pan, heat the butter until it begins to bubble. Add the mushrooms (make sure they are dry if you washed them) and thyme. Cook until browned and the butter smells like heaven. Add the half cup of milk, and stir until you get a first boil. Remove from heat and set aside, or if your lentils are ready, incorporate. Turn off heat. Serve with a spoonful of heavy cream and a pair of oregano leaves.

2 thoughts on “Lentil and mushroom soup”